Review of "Tales to Admonish" issue #2! Some very good stuff... 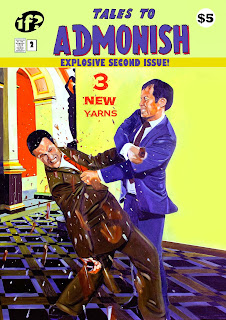 I'd like to start out by saying that I believe, unintentionally, to have put my foot in my mouth. I had mused one day about different author's works that I would like to see recreated in a graphic format on my Facebook page. I had recently finished reading "Who is Killing the Great Capes of Heropa", and included it's author, Andrez Bergen on that list. Mind you, Andrez had sent me a PDF version of "Tales to Admonish" #2 to take a look at before said musing. I had downloaded it and taken a quick look, but hadn't gotten past the title page, with which I was impressed. I came back to it earlier this week, and read through it. Back to the foot in mouth incident; Andrew already has a talented artist illustrating his characters in Matt Kyme! Mea culpa Matt! Your artistry perfectly fits the stories that Andrez brings to the table. Let's get to the review, now that I've got that off my chest. We start out with 'Adam's Ribs' a tale featuring Andrez's character's Roy and Suzie, involved in a bit of vampire hunting. Roy's the hard-bitten professional type, with a flair for sarcastic wit; Suzie's his vivacious assistant, who seems to have a bit of a problem with the proceedings, which I'll get to in a sec. The tale starts at what you would think would be the end; Roy musing about previous vampire kills to himself, about to stake another fanged bozo. As he brings the hammer down to drive in the stake... OBJECTION! On Suzie's part, that is. Apparently, she wants to be dead certain that the corpse in question is actually what he appears to be. Her distraction, causing Roy to misplace his strike, does just that... Roy's musings throughout the ensuing incident are pure gold, along with Suzie's comebacks. A nice piece of noir, mixed with the supernatural. Matt's illustrations are stark black and white, with color inserted at times, which really draws the eye. His work illustrating the trio's expressions (Roy, Suzie, fang-boy) are highlights. Very nice! Had me laughing from the get-go! Moving on, we have 'All Fur Coat, No Knickers', in which Bullet Girl manages to not only foil a robbery, but also find something nice to wear for her date! Pure old-school superhero goodness, in my opinion. If you want more (much, much more) background on Bullet Girl, check out the aforementioned "Who is Killing the Great Capes of Heropa." The opening illustration by Matt definitely reminds me, in many ways, of a image of Sand Saref by the master Will Eisner. Once again, stark black and white, with accents of color. The last of the tales is 'Salvation Nation' set in an a post WWIII setting, where almost everyone is dead. Two survivors in radiation suits search a deserted government base for the 'Salvation Device', their oxygen supply running low, in a desperate bid for survival. Their search is rewarded, but the results are not quite as they hoped for. The last couple of frames had me crying "No you fools!", but that's just me. Definitely evokes the feel of EC and Warren titles from yesteryear, crossed with Stan Lee and Jack Kirby (one of the characters even makes a Kirby reference in the story). Matt's art is once again, black and white, with flashes of color interspersed, but I believe this is a real highlight! Matt really knocks it out of the park on this one... By the way, everything I just referenced, for those of you who haven't experienced the publishers/creators mentioned, means that you should run out and get this title... It's that good! Summing up, I'd rather be reading this than a large majority of more "mainstream" comics that are on the market. Andrez and Matt are both at the top of their game, and you all should take a look. Highly recommended, and if I could give it more than 5 stars on the ranking I would. As it stands, 5 out of 5.

Posted by Shawngeri at 6:41 PM